Posted on April 22, 2019 by inspiredbythespirit

Disclaimer: For Education Only 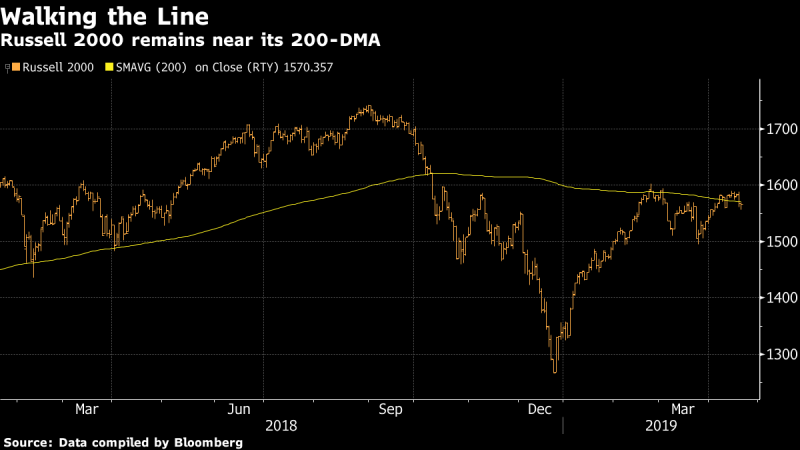 (Bloomberg) — Smaller U.S. stocks may be worth watching right now for both their relative performance and their technical picture.

The Russell 2000 index of small-cap stocks has fallen 1.5 percent since Feb. 22, while the S&P 500 index, which tracks the biggest 500 American companies, has risen 4 percent. And that difference could bode ill for the entire stock market, equity strategist Matt Maley of Miller Tabak + Co. wrote in a note Friday.

The performance of the Russell 2000 is often seen as reflecting sentiment about the U.S. economy, as the companies tend to be more domestically focused versus the relatively international firms in the S&P 500. So, if the Russell is underperforming, it could mean softening expectations for American growth. Earlier this month, Societe Generale SA strategists recommended betting against the Russell.

The 200-day moving average is a popular technical indicator which investors use to analyze price trends. It is simply a security’s average closing price over the last 200 days.

The 200-day moving average commonly expressed as 200DMA is a very popular technical indicator among traders but more among investors to analyze the underlying trend. It is an arithmetic average of the last 200 days closing price. Some prefer open, high or low prices but most widely used is the closing price.

The 200–day SMA, which covers the previous 40 weeks of trading, is commonly used in stock trading to determine the general market trend. As long as a stock’s price remains above the 200 SMA on the daily time frame, the stock is generally considered to be in an overall uptrend.

Smaller stocks are also at a key technical level, with the Russell close to its 200-day moving average for several months now and unable to make a decisive break above it. The Russell closed Thursday at 1,565.75, below its 200-day average at 1,570.36.

If the Russell “finally gets tired of trying and breaks down from here, it’s going to be quite negative,” Maley said. “If, however, it can finally break seriously above that line, it will force us to question our more cautious stance on the small-cap index.”

This entry was posted in English and tagged Finance. Bookmark the permalink.