Posted on September 9, 2019 by inspiredbythespirit 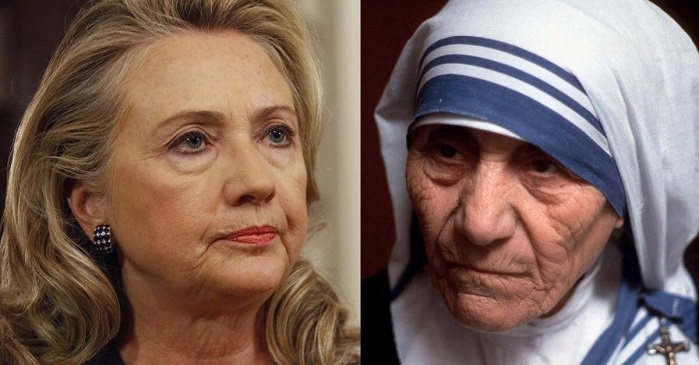 The article is an adaptation of the original article Paul Kengor, professor of political science at Grove City College, Pennsylvania, published on LifeNews.com, on September 8, 2016.

The occasion was the annual National Prayer Breakfast, a huge ecumenical gathering in Washington. President Bill Clinton was a high-profile attendee, with Hillary accompanying him. That year, on Feb. 3, 1994, the keynoter was a very special guest, a Nobel Peace Prize winner and saintly figure who had come from the most impoverished area of the planet, invited by President Clinton.

Held at the Washington Hilton, nearly 3,000 people packed the huge room. Mother Teresa emerged from a curtain behind the platform when she was called and slowly hunched her way to the microphone.

Mother Teresa next spoke of a lack of love for the unborn because of selfishness. Jesus, said the sister, who brought joy while still in the womb of Mary, had died on the cross “to save us from our selfishness in sin.”

“But I feel that the greatest destroyer of peace today is abortion, because Jesus said, ‘If you receive a little child, you receive me.’ Every abortion is the denial of receiving Jesus.”

Peggy Noonan, the former Reagan speechwriter and a pro-life Catholic, was there. She described a “cool deep silence” that enveloped the room, for a moment, and then applause started on the right side of the room and spread throughout the crowd, as people began clapping and standing during five to six minutes.

President Clinton, Hillary Clinton, Vice President Al Gore and Tipper Gore did not clap. They sat there, in the glare of the hot lights, all eyes in the crowd fixed upon them, as they tried not to move or be noticed, conspicuous in their lack of response, clearly uncomfortable as the applause raged on.

“By abortion the mother kills her child to solve her problems. [Abortion is] really a war against the child, and I hate the killing of the innocent child, murder by her mother. And if we accept the mother can kill her child, how can we tell other people not to kill one another? . . . Any country that accepts abortion is not teaching its people to love one another, but to use violence to get what they want. The greatest destroyer of love and peace is abortion.”

The Clintons and Gores remained in stone silence. Bill Clinton realized that his behavior and that of his wife and the others was indeed rude. He apologized to Mother Teresa after the speech.

Mother Teresa had come to give a major moral statement on abortion and did so in a way that shocked the entire crowd. “She had just delivered a speech against abortion,” explained Clinton in assessing the keynote address in her memoirs, almost 10 years later. In the minutes after the talk, said Hillary, the nun persisted, taking the abortion issue directly to Hillary’s face: “She wanted to talk to me,” said the first lady. “Mother Teresa was unerringly direct. She disagreed with my views on a woman’s right to choose and told me so.”

Mother Teresa had said: “Please don’t kill the child. I want the child. Give me the child. I’m willing to accept any child who would be aborted and to give that child to a married couple who will love the child and be loved by the child.” Mother Teresa said, “I will tell you something beautiful. We are fighting abortion by adoption.”

In the course of one of their subsequent conversations, Clinton made clear to Mother Teresa that while she supported legalized abortion, she also wanted to see more adoptions, presumably as an alternative. The nun told the first lady she had placed more than 3,000 orphaned babies into adoptive homes in India. Hillary said she would like to visit the orphanage in New Delhi. A year later, she and daughter Chelsea did just that, visiting one of the Missionary of Charity homes in New Delhi, a facility that, said Hillary, “would not have passed inspection in the U.S.” because there were too many cribs crowded together.

Mother Teresa informed the first lady of her goal of establishing a home in Washington, where mothers could take care of their babies until they found adoptive or foster homes. In turn, Hillary went to bat for her, rounding up pro bono lawyers to do legal work, fighting through the bureaucracy of the District of Columbia and doing what she could to lend a hand to create a home for infant children near Chevy Chase Circle, just over the Washington, D.C., line. She telephoned community leaders and pastors from nearby Baptist, Catholic, Episcopal and Presbyterian churches, calling them to the White House to see where and how they could help. Moving the bureaucracy, said Hillary, turned out to be harder than she had imagined. Hillary Clinton apparently helped quite a bit.

Mother Teresa was equally relentless on her end. When she felt the project was lagging, she sent a letter to the first lady, checking on the progress. “She sent emissaries to spur me on,” recalled Hillary. “She called me from Vietnam, she called me from India, always with the same message: When do I get my center for babies?”

On June 19, 1995, the shelter for children opened, the Mother Teresa Home for Infant Children. This led to a photo op of Hillary and Mother Teresa clasping hands in the newly decorated nursery and smiling at one another. A reporter could not resist asking the uncomfortable question: Yes, conceded the first lady, of course they had discussed their “philosophical differences” over abortion.

“We want to save the children,” she Mother Teresa. The nun, slow and frail, held Hillary’s arm as they toured the facility, examining the freshly painted nursery and rows of bassinets awaiting infants.

This was not the end of the relationship, which Hillary has always looked back upon with fondness. In the short time she had left on earth, Mother Teresa continued to try to change Clinton’s view on abortion. According to Hillary, “she sent me dozens of notes and messages with the same gentle plea.” She dealt with the first lady with patience and kindness, but firm conviction: “Mother Teresa never lectured or scolded me; her admonitions were always loving and heartfelt,” wrote Hillary, adding that she had “the greatest respect for her opposition to abortion.” Mother Teresa saw in Hillary a potentially huge convert to the pro-life cause, and never gave up, but to no avail.

Two years after their tour through the foster home in Chevy Chase, on a Friday, Sept. 5, 1997, Mother Teresa’s heart beat its last. The funeral Mass was held at St. Thomas Church in Middleton Row, Kolkata, and Hillary Clinton was there.

After the memorial service, Clinton unexpectedly found herself invited to a private meeting at the motherhouse, the headquarters of the order founded by Mother Teresa. As the nuns formed a circle around the coffin, where they stood in silent meditation, one of them, Sister Nirmala, mother’s successor, asked the first lady if she would offer a prayer. Later confessing to feeling inadequate to do so, Hillary hesitated and then bowed her head and thanked God for “the privilege” of having known this “tiny, forceful, saintly woman.”

With her canonization, Catholics might look to Mother Teresa now for some formal intercession, as Mrs. Clinton’s trajectory increasingly foreshadows a dark future for the unborn and for religious liberty in America.

This entry was posted in English and tagged Pro-Life. Bookmark the permalink.